The Benefits of Ballistic 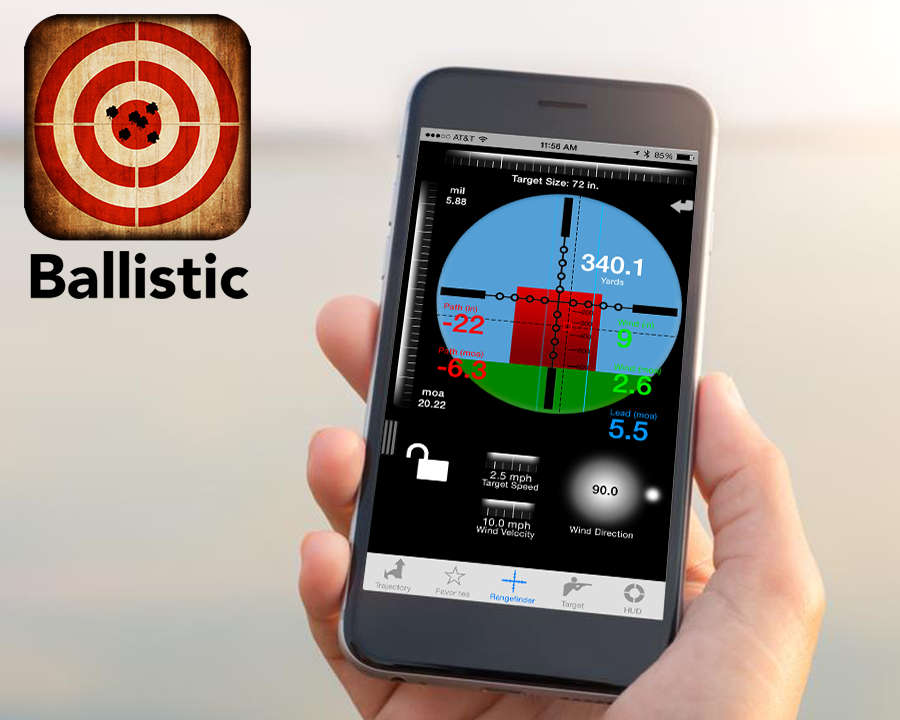 Connor McKibbon at the NRA’s American Hunter is a passionate shooter and hunter. He also knows his stuff, having tested and reviewed hundreds of rifles, scopes and various setups. So when he recently wrote a full feature on BALLISTIC, we were honored!

Read his article below, and also check it out at NRA’s American Hunter.

The Benefits of Ballistic

Most hunters know of some form of ballistic app, and some have probably even used one,  either while at the range or maybe even in the field. While such apps may do the trick for the most part, for hunters seeking the utmost performance from their smart phone or tablet, the best bet out there is Ballistic—likely the most advanced ballistic-calculation app in existence.

Ballistic is built around the JBM Ballistics computer (JBM engine), written by James B. Millard. The technology he created puts his software among the best ballistic engines ever developed, which is why it’s used by hunters, competition shooters and even the military.

The app is geared to two groups of shooters, and most (if not all) shooters will find they fall into one of two categories: professional shooters who are busy due to shooting constantly, or the more casual “weekend warrior” type. The app is able to function within both realms due to its simplicity of navigation, and an easy set-up method which allows the average shooter or hunter to quickly hit the ground running. Nonetheless, it still includes far more features than almost any other app on the market, which gives a significant advantage to those seeking the utmost accuracy in their ballistic calculators.

To best serve the shooter who appreciates a simple, “in the ballpark” approach to ballistics, the JBM engine has a built-in library (updated quarterly) of over 5,400 loads (at the time of our writing), across a broad range of calibers and cartridges. If shooters can’t find what they’re looking for there, I highly doubt they’ll be able to find their factory load on another app, and even if they do, the computer that generates the velocities, energies and trajectories of the bullet probably won’t be as accurate simply because other ballistic apps lack the sheer number of variables (wind, altitude, temperature, humidity, etc.) which Ballistic factors into its calculation, all of which need to be accounted for, especially when taking long-range shots. For easy input pertaining to atmospheric data, one can simply use location setting within the app, and Ballistic will automatically import current weather conditions. The app can also connect to a Kestral, giving one exact wind readings from shot to — crucial for all shooters when firing at great distances. Though this method may take longer than calculating shots on the “HUD” tab (I’ll get to that in a bit), it’s the attention to detail that makes Ballistic arguably the best ballistic calculator on the market.

Upon opening the app, Ballistic defaults to the “Trajectory” tab, on the shortcut menu dock at the bottom of the screen. Also locked onto the dock are the tabs “Favorites,” “Rangefinder,” “Target” and “HUD.”

Under the initial “Trajectory” tab, users can input their atmospheric conditions and view the trajectory of their projectile in four different ways. This means ballistic data can be viewed based on individual factors, which in and of itself is an incredible feature unique to Ballistic. These include a simple ballistic chart (in inches), a wind-drift chart (also in inches), trajectory by altitude and trajectory by shooting angle. Users can also input all of their parameters, such as atmosphere, into a trajectory table, and can add multiple wind-measurement distances between the shooter and the target. Even target speed can be taken into consideration for the app. On top of that, Ballistic considers spin and stability of the projectile if you choose to include those variables, as well as Coriolis acceleration. Ballistic even utilizes the gyroscope in one’s smart phone to determine one’s shot angle, which it then figures into the ballistic calculation. One simply taps the LOS (line-of-sight) input on Ballistic, places the phone on the turret of the scope or a cool (emphasis on cool) barrel, and taps again to lock in the shot angle. For hunters, vital-zone radius is even included. This is just a handful of the variables Ballistic takes into account. One final aspect, which may not be used too often but is interesting to view, is the 3D image of the trajectory of the bullet.

For those who want a bit more depth from their ballistic calculators, no feature I can think of was excluded. Handloads are simple to add to a “favorite” section, and users can even specify their own projectile characteristics. What’s more, Ballistic also functions in some respects as a reloading notebook, allowing one to list within reload data the powder type, powder weight, primer type, brass make, C.O.L., and even lets shooters account for powder sensitivity—a feature I’ve never seen before in my extensive use of ballistic apps. This feature allows the user to list the change in fps per degree Fahrenheit, to better estimate trajectories when temperatures fluctuate. Multiple trajectories can also be compared on the ballistics charts against each other, so shooters can pick the best load possible from their favorite loads.

The “Rangefinder” tab is another cool, unique tool built into Ballistic. To start, users select a “Bullet Profile” followed by an “Optics Profile.” This is where Ballistic really shines outside the realm of a ballistics calculator. In this “Optics Profile,” default mil-dot reticles of varying types can be used as a standard option, but the truly, ingeniously brilliant component of the “Rangefinder” tab lies in the fact that users can import their scope reticles into Ballistic. If shooters know their sustentions (those measurements are typically listed in the scope’s manual), they can import those measurements into Ballistic, along with a digital image of their reticle from the photo library on their phone. Finally, add a few other bits of info for scaling purposes—such as high and low magnification numbers and the focal plane in the scope—and then the magic happens. Ballistic just turned one’s personal scope into a rangefinder. Now one must simply enter sighting info (range, wind speed and direction and LOS angle), atmospheric conditions (which can be manually entered or auto-entered, just like in the “Trajectory” tab) and the “Output options” (muzzle velocity, Coriolis acceleration, and your optical-adjustment units), and swipe left to show a rangefinder. Here, one scales the target size (the arrow in the top right allows for different measurement units to be used) to the corresponding size of the target with the slider at the top of the screen. After scaling to the correct target size, since the reticle on the screen matches the one in the scope, simply scale the target on screen to what is seen in the scope using the scroll bar on the left-hand side of the screen. The range has now been calculated. Other important info can be seen, such as the path of the bullet, the wind and even target lead in the selected adjustment units. At the bottom portion of the screen, the target speed and wind velocity can be input using the same slider system.

The “Target” tab is essentially a log book that allows one to save information down to the most critical detail, including initial cold-barrel shot placements. Atmospheric conditions, target logs, target pictures, groups … logs can even be printed.

Lastly, the “HUD” tab provides shooters with a quick and simple ballistics calculator for adjusting for shots on the fly.

If I haven’t implied it enough throughout this article, let me be abundantly clear. There is so much more than meets the eye here. Almost too much. But for those shooters who want everything under the sun and then some when it comes to the capabilities of their ballistics calculator, Ballistic is the best tool available, as it’ll get however detailed you want and get the job done. The only thing it can’t do is pull the trigger.

For more information on the Ballistic app, which is only available for iPhone on the app store for $12.99 (sorry, Android users), visit ballisticapp.com.

Pro Tip: Our 5 Must-Have Items to Have In Your Range Bag »
« Pro Tip: Ballistic for Precision Shooting in Winter Conditions