It’s Drag! And Ballistic Has Exactly the Right Solution.

On the Range with Ballistic:

Its Drag! And Ballistic Has Exactly the Right Solution 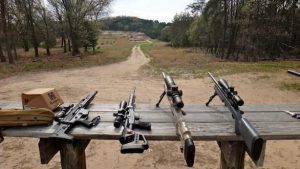 As soon as it leaves the muzzle of your rifle, that bullet is subjected to many forces working to throw off the bullet from its intended path. One of the top forces?  Bullet drag.

At 200 yards, bullet drag might not matter for the person who is satisfied with a decent group. But if you need absolute precision or are shooting at longer distances, bullet drag must be factored into your calculations for exact hits, time after time.

Bullet drag is often confused with bullet “drop,” but the two factors are different. Bullet drop refers to the influence of gravity pulling the bullet towards the ground and below the rifle’s line of sight.

Bullet drag, though, is all about the air and how much it resistance is provides during flight.  Sometimes referred to as “aerodynamic drag,” bullet drag increases as the density of the air increases. For the long-range shooter, more drag means your bullet will slow at a faster pace versus less drag, and a slower bullet is more susceptible to gravity and wind.

Air density is influenced by many factors, including altitude, barometric pressure, temperature and relative humidity. At higher altitudes, for example, air tends to be thinner, providing less resistance, while air generally becomes heavier (and therefore more resistant) as the altitude is closer to sea level. Colder air, to use another example, is more dense than warmer air.

Now, there are complex mathematical equations you can use to figure bullet drag, and an engineering degree from MIT would be a big help here. Don’t have the MIT credentials?  Then just use Ballistic!

The Ballistic app section, “Atmospheric Conditions,” has inputs for altitude, barometric pressure, temperature and relative humidity, as well as numerous other factors that can affect not only air density but the exact path of your bullet.

Once you enter all these inputs into Ballistic, bullet drag will be automatically calculated for distances close and far. As environmental conditions change over the course of the day, simply adjust your inputs and Ballistic will instantly re-calculate bullet drag into your long-range shooting solution.